I thought you might like to see some video of a typical picnic in Kosovo. I think this link will work.

Fun in Kosovo for sure.

Speaking of fun, we've been having a lot of that lately. No picnics but...

This past week we had dinner with three Minnesotans: two judges and a prosecutor. It was so nice to be talking with native English speakers and Americans at that! Minnesota allows its judges to take a year sabbatical to work abroad making it much easier for them to join a Mission so there have been quite a few of them through here. We had a great time. Interestingly enough we ate at a Thai restaurant - and a really good one, too.

We also experienced "Cinema Civinni" on Wednesday night. Every few weeks a group of Italian judges and lawyers get together to have a bite to eat and watch a movie. Guilianna Civinni organizes this thus the name. Italians are the BEST people to party with. There is always great food and fun. We had typical Italian faro soup - it's kind of like barley - and it was yummy. It was a little odd though to find us Americans watching "Naked Gun" with a bunch of Italians. Seems like it should have been a Fellini flick or something like that but "Naked Gun" it was...and it was funny. The Italians got almost all the gags, too, even the obscure American-reference ones.

There was one other non-Italian there. She is a lawyer from Austria who speaks fluent French, English and, of course, Italian. She got most of the gags, too. Charlie wants them to watch "Blazing Saddles" next. Can you believe the examples of American culture we are exporting! I bet you anything "Dumb and Dumber" will be next.

Tonight we are going up to the French Base near Mitrovica for dinner. There is a true French restaurant there  (obviously since it is a French Base) and Charlie said it is fabulous. We are meeting some of his Mitrovica friends and are looking forward to a great night. I hear they have true French pate de fois gras. Can't wait! I'll let you know how it goes.

Speaking of Mitrovica, here is my favorite photo of Charlie taken when he was working up there: 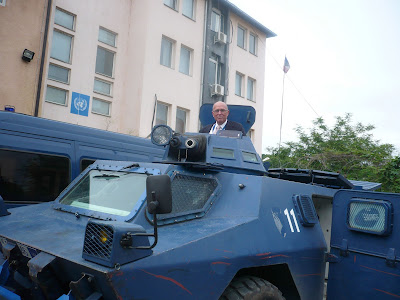 Posted by Charlie and Kathy's Big Adventure at 4:34 AM