We weren't so lucky with the weather Saturday morning. It was cold and windy with a bit of rain. We booked a boat tour of the Golden Horn for that morning so the water was quite choppy and it was so cold everyone ended up inside the boat instead of on the top viewing deck. Charlie and I braved the bad conditions on the upper deck until the bench in front of me blew over on my legs. Definitely time to move downstairs with everyone else.

Unfortunately our guide for this trip was as bad as Evril was good. So I don't have very much to say about the photos except that they are examples of architecture which we saw as we made our way up and down the coasts of the Golden Horn.

Again another mosque but interesting because of the skyscraper in the background. 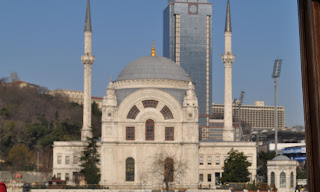 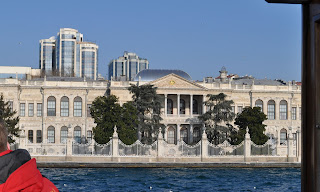 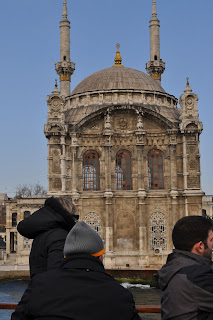 I do remember that this is one of the most expensive hotels in the world.  The guide said it costs thousands of euros per night. 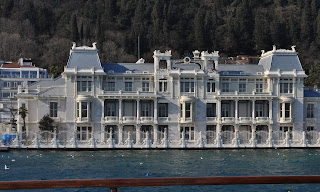 This is the "Fortress of Europe" built in the 15th century to protect Istanbul and, obviously, Europe. 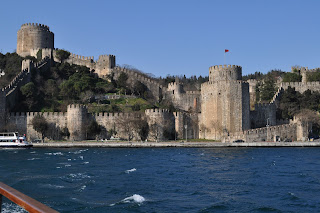 One of the bridges spanning the Horn. 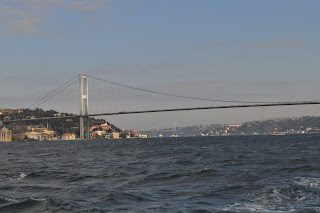 This is where the Golden Horn ends. Rather unimpressive, isn't it. But there it is. 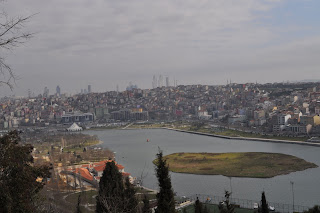 Next stop: The Spice Market. It was so much fun to see all the beautiful colors and smell the delicious aromas of the spices. 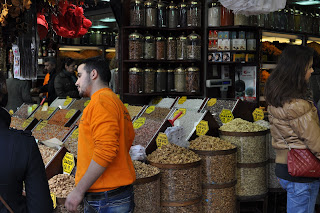 We bought some spices from this man. I loved his"store". It had everything! We even bought some saffron from Iran. 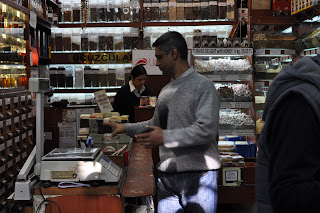 The Spice Market also had a wide selection of dried fruits...along with Turkish Delights 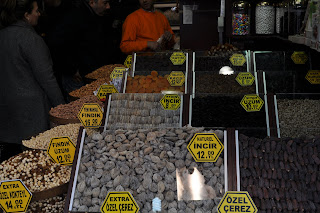 There was a mosque just outside the Spice Market where we did see the men performing ablutions. This man was showing his little boy how to go about it. 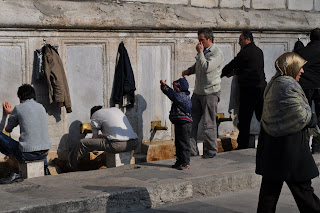 Charlie was very anxious to step foot on a different continent so after the tour we took a taxi across the bridge onto the Asian side of Istanbul. We stopped for lunch at this little restaurant which we came upon. I don't think they got may Americans here. They didn't quite know what to make of us. Although they did have hamburgers on the menu. We proved to be very predictible and ordered hamburgers and fries. The fries were great but the burger... no so good. But the view was beautiful! 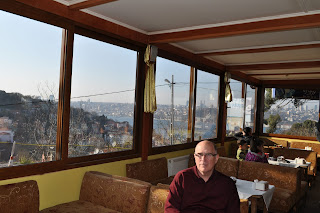 We were on the bridge when this was taken. Asia and the left; Europe on the right. 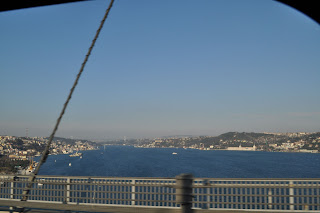 The morning we left we strolled by Haghia Sophia again. The lighting was so beautiful I had to have a photo and included Charlie in it.  It was a nice ending to our trip. 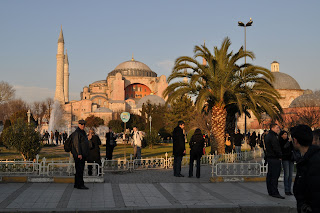 We saw just the very surface of Istanbul. We plan to go back and spend an entire visit just at the museums. It truly is quite a place.
Posted by Charlie and Kathy's Big Adventure at 10:35 AM