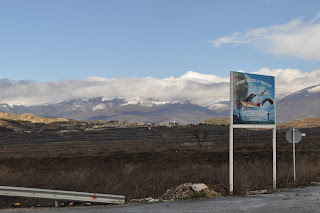 I promised pictures from our trip to Macedonia and here they are. I finally figured out how to upload them. This is a shot on the road. The area is mountainous and there was snow on the peaks. The road wasn't too bad, either. This was taken while we were waiting to cross the border from Kosovo into Macedonia on our way to Skopja.
Skopja is a very ancient city which has been a trading center for centuries. It sits on the Vardar River which flows south through Greece and empties into the Aegean Sea. It's remarkable to think that this area has been inhabited since 4000BC. The Romans began their rule here in 148BC. Then in 395 AD the area fell under the Byzantine Empire. In 1393 the Ottoman Turks began their 520 year reign. The Ottomans were ousted in 1912 in the first Balkan War. Sadly, in March 1943 the entire Jewish population of Skopja was deported to Treblinka. In 1941 Macedonia joined Yugoslavia and became independent with the collapse of that country in the late 1990's.
I think as an America it is hard to really imagine what it is like to have such an ancient history. It seems in our country we think anything 200 years old is ancient. When you think of the prejudices and injustices done in our short history and the results thereof in our society and then think of the centuries of hatreds and injustices in these old countries it gives you some perspective on how deep-seated they are and how difficult it is to overcome them. I think about this especially here in Mitrovica where so many awful things happened to people we know during the latest war. And it's just a repetition of what has happened to or was done by their ancestors for ages. But they are capable of putting this all aside and moving forward no matter how slow and difficult.
But I digress...Now back to the travel log....
In 1962 an earthquake destroyed 80% of Skopja so many of the old, charming buildings are gone. Today the city is undergoing a massive restoration and renovation. The city does have its charm. The old bazaar survived the earthquake and was a fun place to visit.
We had to cro

ss this Stone Bridge (Kameni Most) to get to the bazaar. The bridge spans the Vardar River and was constructed in the 15th century . It figures in a great deal of Skopja's history. It joins a large and pretty plaza on one side of the river to the old town and the bazaar on the other side. From it you can see the riverfront restoration the city is undertaking.

The bazaar was true to its name: sights, sounds, smells - everything you would imagine a bazaar to be. We stopped for lunch at this little cafe and the owner was kind enough to prepare us a meal of typical dishes. I'm not sure what is was but it was really good.
We also went to the Daud Pasha baths which were construct

ed by Sultan Mehmed II in the mid-15th century and currently house an art gallery. This is a shot of one of the domes. They had plastered some of the ceiling to show what the original looked like. It was interesting to see that the stony walls we see were once all plastered and sometimes even colored. The baths are an important example of Turkish architecture of that time.
There is still lots more to see of Skopja - we didn't get to any of the mosques - so we are planning on a return trip.

At the Macedonia/Kosovo border we saw this sign posted. We wondered how many people have smuggling and corruption to declare at customs. That sure makes it easy for the customs people!
So our first outing went well and we enjoyed the day.

Posted by Charlie and Kathy's Big Adventure at 6:29 AM